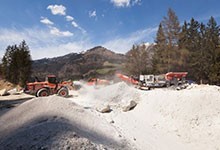 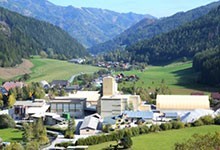 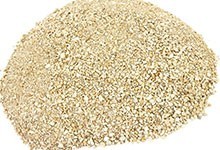 In Oberdorf (parish of St. Katharein / Lg.) there are three mines, two underground mines (Angerer and Wieser) and one surface mine (Kaintaleck).

The fourth mine, operated as open pit mine, located in Wald am Schoberpass, is located about 60 km northwest of Oberdorf. Since the 2nd quarter in 2013 we have taken over the mining area in Hohentauern.

The three deposits are located in Oberdorf in a palaeozoic shale zone, consisting of graphitic shist and phyllite. Lying in the region of the support is found a powerful, stable lime band. In the slope, mostly in the mining Wieser, one can always find talk programs with different thicknesses.

The surface mining in Wald am Schoberpass and in Hohentauern, the southern side of the valley in Palten-Liesingtal, is within the so-called Veitscher ceiling of the eastern greywacke zone. Both, in Oberdorf and in Wald am Schoberpass further magnesite deposits are existing. Their scope and coverage is currently under further examination by Styromag. These studies and all major mining projects are done in collaboration with the University of Leoben.

Currently, the mines operated by company Styromag include a secure matte resource of about 20 million tons. The entire matte mining of Styromag, including the supply of the new multiple hearth furnace and the production of so-called c-material, that is used unfired in the steel industry, adds up to 120.000 tons per year. Based on these parameters, the sustainable supply of raw materials is secured over a century.

Under "Settings" you will find detailed information about the cookies used and you can manage them yourself.

You can find more information about your rights as a user in our Data protection declaration.

Here you can view or change the cookie settings of various tools that are used on this domain.
(An * indicates a possible prefix or suffix.)